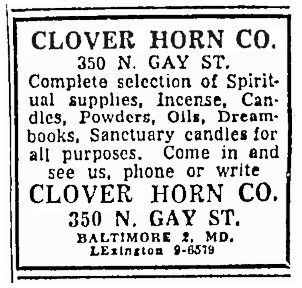 The Clover Horn candle shop in Washington, D.C., along with its sister store in Baltimore, MD (now known as Jericho Candles), was founded by a Jewish-American chemist named Marcus Menke, who sold and distributed hoodoo supplies and cosmetics for the African-American market, as well as Jewish religious supplies for hoodoo practitioners.

Marcus Menke (1895 - July, 1973) was born in Memphis, Tennessee, to Isaac Menke (1858 - February 6, 1927) and Bertha (Berta) Cohen Menke (October, 1870 - January 7, 1933), one of ten children. His father ran a carpet installation and cleaning service on Beale Street, and the entire family worked in that business until after World War One. His mother, Bertha Stanwood Cohen had been born in England, arrived in the USA at the age of nine (c. 1879) and married Isaac in Memphis, Tennessee. Bertha's parents were Marx (Max) Cohen and Anna Stanwood Cohen.

By 1924, Marcus Menke lived in a small bungalow on North Parkway and was listed in the Memphis City Directory as a salesman -- probably for the Memphis-based Keystone Chemical Company, which had just been started by Menke's cousin Joseph Stanwood Menke (March 5, 1889 - February 27, 1940) and his partner Morris Shapiro, a real estate agent, paving salesman, and the son of the Polish-Russian born dry-goods merchant Solomon (Sal) Shapiro (July 1867 - ) and his wife Sarah. The Shapiros also had two daughters, Jennie and Kate, both born in Kentucky; Morris was born in Tenneesee.

Within a year, Keystone Chemical Company was re-titled Keystone Laboratories "The Reliable Company," and moved into the manufacture and marketing of hoodoo supplies and African American cosmetics throughout the South.

By 1933 Joseph Menke's partner, Morris Shapiro, had left Keystone and was the president of Lucky Heart Laboratories (later Lucky Heart Cosmetics), one of the largest manufacturers and distributors of hoodoo products, but Marcus Menke kept on working for his cousin, Joseph Menke: In 1937 he resided on Pryor Street in Atlanta, Georgia, where he was listed in the City Directory as the regional branch manager of Keystone Laboratories.

Joseph Menke died in 1940 of a stroke, at the young age of 46. His company, Keystone Laboratories, continued in business under the leadership of his widow Hilda Stark Menke and the couple's son Hubert Stanwood Menke (July 31, 1922 - October 3, 1991).

Marcus Menke, after six years as a spiritual supply merchant, did not stay with Hilda and Hubert Menke at Keystone, perhaps because there were personal and family disagreements over his role under the company's new leadership. Instead, he moved to Newport News, Virginia, in 1940, where he briefly returned to his old family trade in the carpet installation and cleaning business.

In 1942, during World War Two, Menke was employed by the government in the U. S. Naval Shipyard in Portsmouth, Virginia, residing on Chestnut Street. In 1943 he relocated to Baltimore, where he once more took up the work of supplying hoodoo and conjure practitioners with rootwork goods, founding his own organization, the Clover Horn Company, on 350 North Gay Street. He eventually expanded to a second shop in Washington D.C. 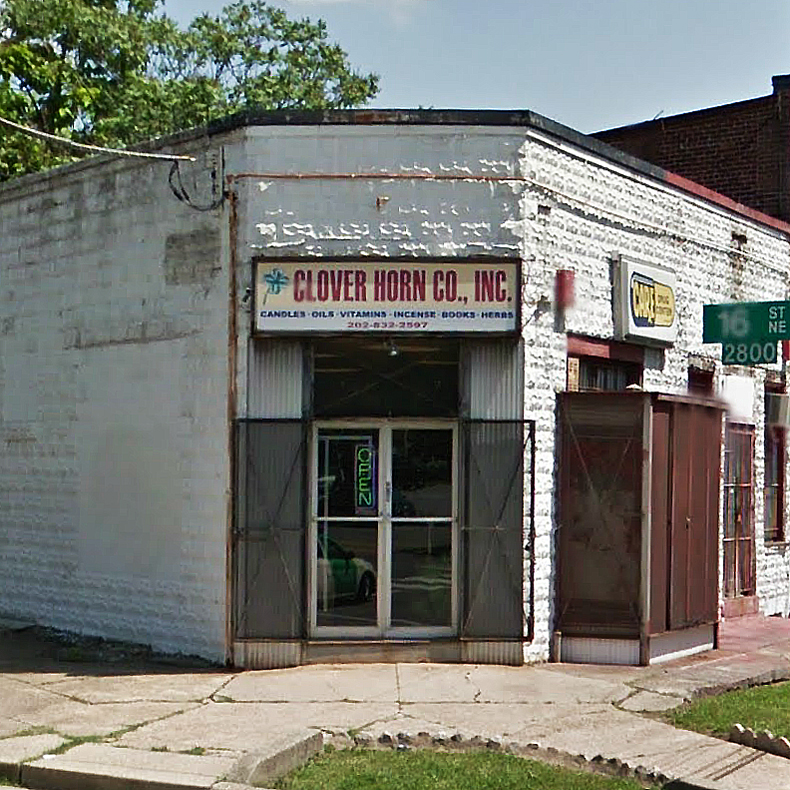 From the beginning, Clover Horn's Baltimore manufactory, like Keystone and Lucky Heart, catered to an African-American clientele with the usual mixed line of cosmetics, drugs, and hoodoo spiritual supplies found in many hoodoo drug stores in the Black communities of those days. Menke, who had a background in chemistry, manufactured his own cleaning supplies and toiletries himself and acquired others through distribution deals with Keystone in Memphis and the Valmor / King Novelties / Famous Products Company in Chicago.

Marcus Menke sold both retail and wholesale, as well as by mail order. Along with Morton Neumann of Valmor, he was one of the two suppliers of herbs, soaps, washes, oils, and other articles to the great African American healer and root doctor Dr. Jim Jordan, who operated a general store and hoodoo shop in Como, North Carolina from 1927 until his death in the early 1960s.

One thing that set Marcus Menke's establishment apart from some others of its era was that, like the Oracle Products Co. of New York City, owned by "The Mysterious Mr. Young," the Clover Horn Company always carried a line of Jewish religious goods (and even kosher soap), as well as Christian and African-diaspora spiritual supplies.

Among the Clover Horn's most popular products was Temple Fragran, a liquid spiritual cleaning product similar to Young's brand, Chinese Wash. However, rather than being a carbon copy of Chinese Wash, Temple Fragran was actually formulated in a manner more closely in accord with African American folk magic traditions of floor washing and sweeping because it included broom corn straws right in the bottle, with instructions that when you were finished with the liquid soap, you were to take the broom corn straws and scatter them in your yard.

In May, 1995, my friend K. Rudin gave me a 1951 catalogue from Clover Horn Products of Baltimore, Maryland, which awaits image scanning and a thorough write-up. K. visited this outfit and even briefly worked there during the late 1960s. Mr. Menke still owned and operated both Clover Horn stores, but by that time the growth of cut-rate drug store chains had caused him to limit his stock to spiritual supplies.

When Mr. Menke died in July of 1973, he left each of the stores to his employees so that the work would be carried on.

The pictures on this page are of an advertisement that ran in the "Baltimore Afro-American" newspaper on August 23, 1958 and of the Clover Horn store in Washington, DC, as it looked in 2012.

Keystone Laboratories and Lucky Heart Cosmetics continue in business to the present, selling a variety of hair care and skin products, none of which are spiritual or magical in nature.

Illustrations of labels, packaging, catalogue pages, advertisements, and agents' flyers for Valmor, King Novelty, Lucky Brown, Lucky Heart. Clover Horn, and other cosmetics and spiritual supply companies of the pre-World-War-Two era, plus further text-based information on the interplay between occultism and hoodoo in the inter-war period, can be found on these "Hoodoo in Theory and Practice" pages by cat yronwode: