HIGGINS:
THE DOG WHO PLAYED BENJI
(TRAINED BY FRANK INN) 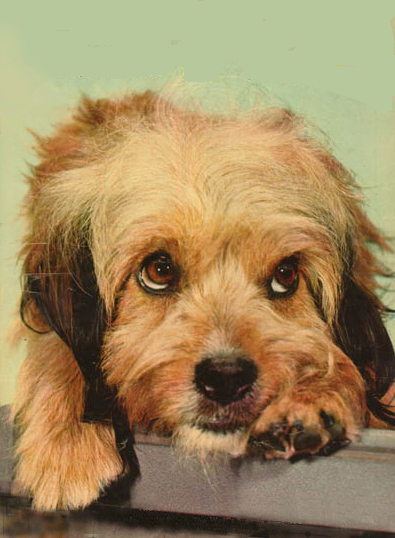 This is the beautiful dog Higgins who is best known for having played the character "Dog" on the 1960s television series "Petticoat Junction" and starring in the 1974 movie "Benji." He was trained by Frank Inn. 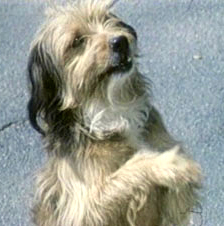 If you haven't seen the movie "Benji," rent or buy it -- it's a charming story, and you will also see what may be the greatest performance by a dog actor ever filmed.

Most dog actors suffer from what i call "trainer-eye" -- they are supposed to be emoting, or just sitting around looking cute -- but they ignore their human co-actors and keep looking off-camera trying to catch the eye of their trainer, who in turn often has to give them repeated cues to sit still. Probably the worst example of trainer-eye in a well-known Hollywood film is the scene in "The Wizard of Oz" (1939) where the dog playing Toto is supposed to sit still and gaze adoringly at Judy Garland as she sings the famous Yip Harburg song "Somewhere Over The Rainbow." The dog is visibly eyeing the trainer, though, trying to get off the set, and is being told repeatedly to "sit - stay." It is painful to watch, if you know dog training. 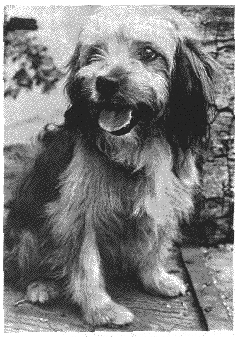 "Benji," on the other hand, demonstrates how a brilliant dog actor and a brilliant dog trainer can interact. Higgins and Frank Inn were a team who had worked together for more than a decade at the time "Benji" was made, and Higgins was, according to Frank Inn, the smartest dog he had ever trained, and the most willing to learn new routines. Frank Inn and his assistant Karl Miller had worked with Higgins through many episodes and seven seasons of "Petticoat Junction," and Higgins was required to learn a new routine (generally built up from several basic tricks) for each episode in which he appeared. In 1971, at the age of 11, Higgins starred in "Mooch Goes to Hollywood." As an older dog, he was then retired, but in 1974, Frank Inn brought him out of retirement to star in his greatest role, the loveable mutt in Joe Camp's "Benji."

"Benji" begins with a basically realistic look at how an ownerless dog might successfully survive in a small Texas town by befriending a series of kindly people, but as the story progresses, we are led, step by step, to believe that he is almost as intelligent as a human being. The suspension of disbelief required for a viewer to see the dog as not only altruistic and heroic, but also a logical planner, is so incremental that children almost never catch it, and even adults might wonder where exactly the screenplay shifts from a dog documentary to a fanstastic action-drama starring a dog. Credit for this amazing shift of focus certainly must go to the writer-director Joe Camp -- but only a dog actor as adroit as Higgins and a trainer as astute as Frank Inn could have pulled it off. 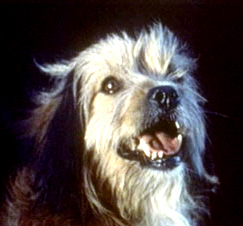 The film opens with Higgins taking a series of seemingly "untrained" -- but actually tightly choreographed -- runs through the town, during which we get to see the local scenery, meet the local people, and also (importantly as it turns out) learn through repetition just how long it takes a small dog to run from one point in town to another. The extensive Hitchcockian tracking shots of Higgins operating from his own memory of the set, augmented by hand signals and off-camera verbal cues, are amazing enough, but then the plot takes off, and for the rest of the movie, Higgins works through one complicated and uncut scene after another -- the obtaining and opening of the pudding cup, the long runs through the abandoned police station, the tense attempts to get someone to pay attention to the second ransom note -- and he makes these lengthy scenes look effortless and natural, with no trace of trainer-eye or even any references to the presence of a trainer at all.

Even more endearing are the facial close-ups in which Benji conveys his feelings of pride, love, fear, depression, sorrow, and "intelligence." Higgins was without a doubt the most expressive and emotionally nuanced dog in the history of film, but key to the success of Higgins and Frank Inn as a team was that Higgins did not need to be looking at Frank Inn all the time -- he could relate extremely well to any actor who gave him his cues. This is especially obvious in the scenes between Higgins and Patsy Garrett, who plays the housekeeper, and between Higgins and Edgar Buchanan who plays the old restaurant owner. Higgins and Edgar Buchanan had worked together for years on "Petticoat Junction" (where Edgar Buchanan played Uncle Joe Carson), and their rapport was such that they could actually improvise together effortlessly, each taking cues from the other. 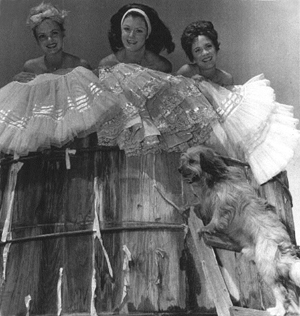 By the way, if you ever wondered what a dog trainer like Frank Inn or Karl Miller actually does on a movie featuring animal actors, here is a little bit of behind-the-scenes lore: Watch "Benji" on DVD and check out the early scene in which Higgins climbs up the intricate pile of boxes, trellis-work, and lumber that leads to Benji's hide-out in the abandoned house. This sets the stage for a later scene when Tiffany, Benji's love-interest, joins him, and he leads her up the same set and into the house. Higgins was a great climber (as this picture of him on a ladder on the "Petticoat Junction" set demonstates), and he traverses the obstacles with ease and panache, but Tiffany is a smaller animal -- and far less athletic that Higgins. At the top of the trellis she almost falls, then recovers herself and finishes the stunt.

Re-run the scene frame-by-frame and look very carefully at the bottom of the screen -- just for a moment, you will see a man's hands reach up into the frame and then withdraw. Those hands desperately reaching up to catch Tiffany if she should fall are the hands of Frank Inn's assistant, the dog trainer Karl Miller. As Tiffany makes the turn at the top of the set and moves to the right across the long board, you will see Karl Miller again very dimly, quickly following along and moving under her behind the trellis, "just in case." Obviously this stunt was at the very limit of Tiffany's capacity, and Frank Inn knew she would not be able to repeat it, for not only was it not reshot, despite the trainer's brief intrusion into the frame, but you will notice that later in the film, when Higgins climbs the set for a third time, once more with Tiffany behind him, there is a scene cut -- she couldn't do it again.

Successive "Benji" movies -- some featuring the female dog Benjean, a daughter of Higgins who was also trained by Frank Inn -- are fun family fare, but they demonstrate that dog actors are as individual as human actors. Made by the same director and the same animal trainer, but without Higgins (who had retired again at age 15) none of the other "Benji" movies capture the emotional dynamics of the first film.

Benjean is recognizable by her paler and softer-textured fur, her lack of external genitalia (Higgins was definitely a male), the larger patch of white hairs around her nose, her shorter teeth, and by the fact that her ear tips had to be dyed black to look like Higgins' ears. She was a great dog actress without a doubt. She never suffered from trainer-eye and she could memorize complex long-shot scenes over a distance, but she lacked the emotional versatility of Higgins. In "For the Love of Benji" she plays the part of a lost dog with pathetic, heart-tugging realism, but she never conveys the grit, spark, or gumption that Higgins brought to the role of an ownerless mutt. Only in the sausage-stealing scene with the wonderfully sympathetic actor who plays the butcher do we see Benjean projecting the same sense of joi-de-vivre that Higgins brought to "Petticoat Junction" and "Benji."

The director Joe Camp owns the Benji franchise, so any dog he casts in a "Benji" movie is a "Benji" dog -- but as far as i am concerned, the role originated with Higgins and no other dog actor can take his place in my heart.