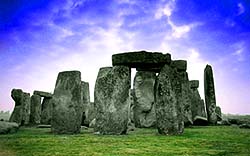 Everyone with even the slightest interest in sacred site architecture will be familiar with Stonehenge, the circular neolithic complex located on Salisbury Plain in England. An Alta-Vista search for the keyword "Stonehenge" discloses more than 400 web sites on which it is mentioned. (The striking picture above was lifted from one of the better of these pages, The Buckingham Gate Events site.) The subject of many, many books (among them good ones by Chippendale, Hawkins, and Meaden, all listed in the Sacred Landscape Bibliography) the site has been described as everything from an archaeoastronomical observatory to a landing place for extra-terrestrial aliens.

What is less well known is that Stonehenge has given rise to many replicas and "metaphorms" (variations in which its form is used as a metaphor) in the United States of America. In discussions of these "clones" in usenet groups and in the e-list sacredlandscapelist@egroups.com, some British subscribers have commented on how "tacky" such replicas are, or how they cannot possibly contain or transmit the "spiritual" energy of a long-hallowed sacred site. Be that as it may, Stonehenge and other megalithic facsimilies, parodies, clones, and metaphorms are the subject of sincere sacred site tourism in the United States. Four of these places -- the Maryhill Stonehenge in Washington, Stonehenge II in Texas, Carhenge in Nebraska, and the Georgia Guidestones in Georgia -- are reputably said to be used as sites for pagan gatherings and ceremonies.

Here is a handy list of Stonehenge clones and other neo-neolithic metaphorms in North America, with illustrated web sites noted (and web-authors credited in parentheses).

STONEHENGE CLONES NO LONGER WITH US

The above listing of Stonehenge metaphorms only covers North America. I know of one such structure -- alas, a temporary art installation now demolished -- built in New Zealand. This was Fridgehenge, created entirely from discarded refrigerators.