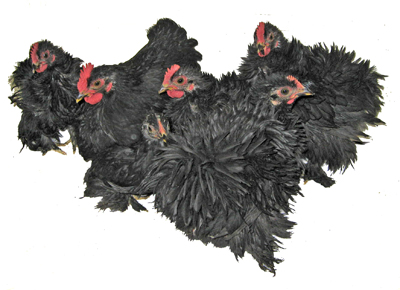 Many African-derived magic spells center around foot-tracks and the potential for harm that comes through contact with the feet of the victim. There are many ways to work hoodoo foot track magic, but one of the most popular is to lay a trick or throw for someone by sprinkling powders for harm (and also for good, albeit in a limited way) where they will walk and step in that mess.

Once you become familiar with foot track magic and all of the practical conclusions that flow from it, you will understand that because harm can be inflicted through the feet, then it follows that both protection from evil and uncrossing the spell for the restoration of good luck can be accomplished by cleaning, sweeping, or washing areas of foot travel with magically potent herbal and/or mineral floor washes and sweeps.

So, with all that understood, we can finally approach the Black Hen!

In rural areas, where you have a large yard to control, the scratching of chickens will clean off messes laid down by enemies. That is, someone may throw powders for you, but the bird will take it up. Hens are the most assiduous at this, because roosters don't scratch as much as hens do. The birds shown here are a group of Bantam Black Cochin pullets and cockerels, four of them frizzled and two smooth-coated, raised right here at the Lucky Mojo Curio Co.

The association between black chickens and the African crossroads god variously known as Nbumba Nzila, Legba, or Eshu -- syncretized in American folk-speech as "the devil" or "the black man" -- gives black fowl a powerful magical charge in their own right. In addition, their association with the famous European grimoire called "The Black Pullet" adds to that reputation.

Like the "black man at the crossroads," who can work either way, the eggs and feathers of black hens can be used for good or for ill. As Blind Willie McTell sang, back in the 1920s, "My mother told me, when i was just a boy playin' mumbletypeg, 'Don't you drink no black cow's milk, don't eat no black hen's egg.' We keep a black Bantam Cochin Frizzle rooster and hens and a black Polish-Minorca cross hen on our place and we get regular requests for their feathers and eggs from folks who have some purpose or other in mind.

To use hen's eggs for good, one generally rolls them over the body (raw and in the shell) allowing them to absorb all negativity and evil. Once they have been rolled over the body, they are thrown away. This is done in a number of ways, depending on the practitioner -- they may be thrown into an outhouse, into running water, into the trash, or thrown and broken at the base of a tree or in a crossroads.

The power of the black hen's egg to remove evil during rites of spiritual cleansing is found in many parts of the world. A Mexican brand of spiritual soap called Jabon de Huevos de Gallina Negra Para Limpias (Black Pullet Egg Soap for Cleansings) is traditionally used for keeping oneself clean btween performances of the full black hen egg rolling ceremony.

CURSES MADE WITH EGGS

To work evil with a hen's egg, it may be used fresh or poked open at one end and certain ingredients are added -- red pepper and graveyard dirt to make people move, or red pepper, sulphur, and feces to hurt someone. The enemy's name may be written on the egg as well. It is common practice to throw such a prepared egg over the house of the enemy, preferably from to East to West so they will "leave with the setting Sun" or to throw it at their front door, to break it, so they'll have to step in the mess.

Another curse in an egg is like this: To break up a couple, write their names out, not touching, cut the names away from each other with pinking shears, and burn the names to ash in two separate cast iron skillets. Stir grave yard dirt into each pile of ashes. If you know of a couple that had a bitter divorce, use the dirt from one in one skillet and from the other in the other skillet. Add fresh dog shit to one and fresh cat shit to the other. Poke a hole in each end of a large egg (preferably from a black Hen. Use a sharp knife point to stick a bit of each mixture into the two ends. Be careful they do not touch or mix. (Wipe down the knife point between the two mixtures.) Throw the egg over their house top so it will smash and break on the other side of the house. They will break up.Or, if you prefer, throw the egg into a running river and they will both break up and leave town.

This same spell can be used with one name and one hole, and in that case some people prefer to throw from the East over the house to the West, so that the named person gets out of town by sundown.

If you can get into their backyard and their house is situated right, you can throw the egg over the roof and have it break in their driveway to drive them out of town.

If you cannot throw the egg over the house, some folks say to break it on their porch.

There are 44 more curses with eggs, many specifying black hen's eggs or frizzly black hens' eggs, at the bottom of this page.

Despite -- or perhaps BECAUSE of -- the association of black hens' eggs with infernal work and crossed conditions, a black Minorca or Polish hen is said to do very well at scratching up messes in the yard. But there is one breed of chicken thought to be even better at this task than a Rose Comb Black Bantam, a Black Minorca, a black Houdan, a Black Australorp, or, in a pinch, a White Crested Black Polish -- and that is the black Frizzled Fowl.

Frizzled Fowl, usually called Frizzles by chicken breeders, are birds born with a genetic abnormality that causes their feathers to not lie flat, but to curl and twist all around in weirdly random ways. (Think of a Rex cat or Rex rabbit, or a Portuguese Water Dog, if you want to know the mammalian equivalent.) Frizzles can be line-bred to remain true to type, and so they are a recognized breed, but they are not common because the frizzling of their feathers deprives them of insulation from the cold -- hence they are only able to live outdoors in the warm-winter areas of the South and West.

The backwards curling of the frizzled feathers on these birds is seen as a natural expression of their ability to undo bad work that has been laid down to walk over. Frizzles come in all the usual chicken colours and patterns, but since black hens are the birds most often used to scratch up evil powders in the yard, it follows that a black Frizzled hen would be the best possible bird in the world for that purpose. As with the black cat, also much admired and much feared in hoodoo work, a black Frizzle hen's dangerous associations with the infernal can be parlayed by a deft root doctor into a powerful tool for undoing and reversing evil and uncrossing clients.

When i was young, the older folks i listened to in Oakland, California, had mostly grown up in the country in Mississippi, Louisiana, and Texas, prior to World War Two. I knew one conjure shop owner who kept a whole dried Black Minorca hen's wing which he used as a whisk while brushing his clients from her to feet and breaking their jinxes and crossed conditions. This conjure shop propietor, and several of the folks whom i met in his store, also told me of the jinx-breaking prowess of this or that black Frizzled hen they had known back home.

The way they explained it, a black Frizzled bird was rare, so she would naturally belong to a two-headed woman or a conjure doctor.

In keeping with the community spirit of African-American readers and root workers, many of the people who kept a frizzled black hen loaned her out around the neighborhood to clean the yards of people who suspected that someone had thrown for them around the house. Any frizzled feathers the hens dropped in the yard could be kept and used in a mojo bags or bottle spells for protection. You would keep the frizzled hen for a month or so, all the while doing other things to spiritually clean the place, such as burning incense and candles, and scrubbing and sweeping the floors, and then, her work done, back she would go to the aunty or uncle who owned her.

Some doctors i knew during my younger years tied nine black feathers together and placed them over the door lintels so that no witches could walk underneath and enter their homes. Some added the frizzled feathers to mojo bags. Some burned the feathers to ash and used the ash in preparing powders to take off crossed conditions. Some collected their frizzled hen's moulted feathers and bound them together to make a little "broom" to brush bad stuff off of clients.

A black chicken feather duster, feather whisk, or feather tickler like the one shown here (which hangs from a stylish black ribbon) makes a very good susbstitute for a either whole chicken wing or a home-made feather "broom" and it can be used either to cleanse a client or to hang over a door as par of a protection spell for the home.