BUDDHISM IN HOODOO:
Buddhist Iconography in the African-American
Hoodoo and Conjure Community 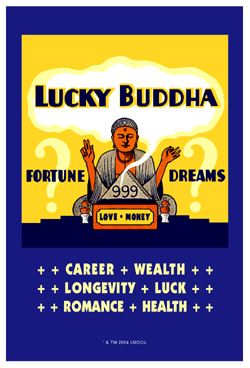 Buddhism forms a minor current in hoodoo folk magic which originated mostly on the West Coast, in New York City, and in Chicago.

If you are unfamiliar with hoodoo and found this page because you were searching on Buddhism in popular American culture, you should perhaps read the short section of the Hoodoo in Theory and Practice page titled Hoodoo History: Admixtures: Asian Influences on Hoodoo

The greatest overlap between the religion of Buddhism and conjure, a form of magic primarily practiced by Protestant Christians, is centered in California. This is the result of the late 19th and early 20th century cultural intermingling of African Americans with Cantonese Chinese immigrants who were adherents to Taoist, Buddhist, and indigenous Chinese religious traditions.

The Cantonese along the West Coast were associated with railroad labour during the 19th century and went on to establish local businesses. Among the business careers undertaken by early 20th century Cantonese entrepreneurs in California were restaurant ownership, agriculture, and the importation of fancy Asian goods such as fabrics, statuary, basketry, games, toys, and tools of divination. In cities such as Los Angeles, San Francisco, Oakland, Berkeley, Stockton, and so forth, the "Chinatown" districts became tourist destinations, and they were often located adjacent to the ghettos reserved for African Americans. The intermingling of the two cultures was supported by strong social ties, including shared interests in martial arts and herbal medicine, although it was also accompanied by sometimes incomplete understanding and mis-assumptions about the roots of each group's religious traditions.

In New York, a truncated version of the same cultural mingling took place. The African American population in the Harlem district did not live adjacent to the Cantonese population in Chinatown, but restaurant ownership and the importation of Asian goods led to cultural reception of a limited number of Chinese Taoist and Buddhist images and goods, which became part of hoodoo iconography. Among there were such items as "Lucky Buddha" products, Chinese Wash and Ling Nuts, the latter known colloquially in the USA as Bat Nuts or Devil Pods.

The mingling of Buddhism with hoodoo in Chicago followed a slightly different course. With no large influx of Asian workers, the blending of Asian religious traditions such as Hinduism and Buddhism into Chicago hoodoo can be traced to two World's Fairs that were held in Chicago. After an initial wave of cultural exoticism involving Hindu traditions had swept over the USA in the wake of the 1892 World's Columbian Exposition, a second wave of Asian cultural exoticism arose in Chicago in the wake of the 1933 Chicago World's Fair which featured the Lama Temple, housing an exhibit of Tibetan Buddhist statuary and religious furnishings. This world's fair took place during the "incense craze" era in the USA, and as a result of the high interest in incense and local interest in Tibetan goods, a Jewish family pharmacy in Chicago created a nationally distributed conjure goods brand known as the Lama Temple products line. This usage was not culturally supported through interaction with practicing members of the Tibetan Buddhist faith, but it brought a great many hoodoo practitioners into contact with Buddhist concepts and imagery.